Most people assume success is all about money, but that couldn't be further from the truth. Success is about peace.

Since leaving the corporate world behind 8 months ago, I’ve had a lot of time and space to think. While it’s pretty cool to wake up every morning and do what you want, reaching financial independence will inevitably cause you to go deeper into yourself. This can feel both freeing and jarring, but if you ride the waves of emotions you’ll find yourself growing and expanding in a ton of expected ways.

It can get lonely. Some days I miss the camaraderie of hanging out with my old team or clients, but I also can’t remember a time when I’ve slept better or felt more rested or calm. It took me a full 6 months to go through my corporate detox and recover from burnout, but now an immense clarity has been opening up to me. A clarity that could only come with more time and space.

I’ve been thinking a lot about success and what it means to me.

Between 2010-2015 I defined success as reaching financial independence, so I could have enough money to live on for the rest of my life. Between 2015-2017 I defined success as escaping from the corporate world and “retiring” early from the daily grind. From late 2017 to early 2018 success was to finish writing my book Financial Freedom, but now what?

The more I try to define it the more elusive it became. Then it hit me.

To me success isn’t about money, it’s about peace.

I’ve thought a lot about Anthony Bourdain’s suicide over the past week. Here’s a guy who seemingly had everything – money, fame, the opportunity to get paid to travel the world. So why was he so unhappy?

After hearing about his death I started watching interviews with Anthony to try and see if I could spot something that was off, any hint in his words that he was truly unhappy. I came across this interview he did with Fast Company where he was asked what life advice he would give to younger people. The advice is pretty standard and what you would expect – take risks, don’t worry too much, explore, be open, be compassionate. But then later in the interview, he talks about one of his worst nightmares is being in a room where everyone agrees with him. Where he’d be bored.

Success to Anthony Bourdain clearly meant having the freedom to do whatever he wanted, but in the end, freedom wasn’t enough, and in fact, freedom might have ended up boxing him in because he lost the challenge and the friction that made him so creative early on.

He clearly had reached a level of success so many people dream of, but after he reached it where else did he have to go? Another season? Another episode? Another book? At some point even, an amazing job like getting paid to travel the world and eat food can probably feel like a routine. Here’s the full interview – it’s worth a watch.

Maybe Anthony lost his joy. Maybe it wasn’t enough. Maybe he couldn’t find peace. It was well known that he spent over 200 days a year on the road and many of his friends in their tributes wondered if he spent so much time working because he was running from something. Who knows, but it does make you wonder. If he had peace would he have done what he did?

So what’s changed? Why is this happening? Why are so many people unhappy?

There are obviously many reasons and it will take years to further unravel what’s making us so unhappy, but I think it has a lot to do with what we think will make us happy or what we are told will make us happy, as well as how we define success.

We see how others live on Instagram and both consciously and unconsciously compare ourselves with others. It’s how our brains are wired.

Often when I use social media I feel anxious – why don’t I have as many Instagram followers as that blogger, or why didn’t people retweet this tweet? Why didn’t that follower who liked everything stop liking my posts? Should I be tweeting more? I’ve only tweeted 1,800 times in 3 years when many others have tweeted 30,000+ times.

It’s dumb, but I for some reason can’t help but feel it. It’s one of the reasons I took so long to even create an Instagram account – I really don’t like how anxious social media makes me, and clearly others feel. But I do enjoy seeing what all my homies are up to and occasionally engaging in the conversation. BTW you can follow me on Instagram here (it would make me happy though!).

I can’t imagine how 20-year olds, who spend an absolutely insane amount of time on social media, feel. But social media is clearly making them anxious and unhappy too. Like really unhappy. This past week a new study showed that depression rates in the United States are increasingly rapidly, especially amongst teens between 12 and 17 years old. The future generations are already stressed out and life certainly doesn’t get any easier.

And this one woman went $10,000 into debt for the perfect Instagram shots. We want to look successful. We crave the outward appearance of it. Many of us believe that success is the next job promotion, or the $10,000 raise, or the new car, or the new house, or the trip around the world, of the perfect Instagram shot, or even financial independence.

We also spend so much time being busy. Busyness is truly an epidemic.

We live in a world where we chase success and the next emotional high of completing a project or getting a promotion or winning a new piece of business. It’s easy to be business and we think it makes us feel good, but in reality, we are often running after something external because it’s more difficult and more uncomfortable to go stop and go inside, to ask ourselves do we really want to be doing this.

It’s often only in moments when we are forced into reflection by confronting the death of someone we cared about or someone we admired, to think about if we are really living our best lives. Or if we really love our lives. It’s easy to snap back into a routine that makes us comfortable and be busy so we feel like we’ve accomplished something, but in reality, we confuse being busy with being alive.

You need to live your own life, not someone else’s. If you measure yourself against anyone else or some external measurement you will always fall short (even when you make it). It will never be enough.

It’s often difficult to find peace because we are constantly changing. I’m a really different person than I was when I started my FI journey at 24. Like almost completely different. I meditate and enjoy doing yoga. I go to the ballet and enjoy bird watching (guess I’m becoming an old man at 33!). I enjoy staying in on a Saturday and listening to records or getting lost in a good book. Let yourself grow. Growing is living.

Happiness, peace, and joy all come from within

Pursuing financial independence is a lot of fun and it’s empowering to be able to say no to consumer culture and watch your net worth grow. When I first discovered FI I felt like I stumbled on the “Truth” and there a reason I subtitled my book “A Proven Path,” because it’s a path that works. It worked for me and it’s working for more and more people.

But while the FI game is fun and if feels good to feel in control of your money, FI can also become a money addiction in another form. If you’re only about the numbers and the spreadsheet, or the next savings goal, you might miss the important stuff. The whole reason we’re saving in the first place. Money only matters if you live a life you love.

Instead of a number, a spreadsheet, a collection of things, a perfectly curated Instagram, or the next raise, consider measuring success by how peaceful you feel instead. It’s a lot more fulfilling. 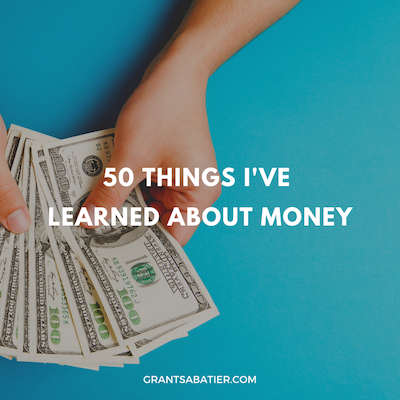